skip to main | skip to sidebar

Sundry information, thoughts and links to sort us out

While I wear a lot of proverbial hats at work - Director, Producer, Writer, Editor, etc. - I didn't used to be much of a literal hat person.  That is, until recently.

It all started in the summer of 2010, when we were planning a family trip to Disney World & I decided I needed a good sun hat. For most of my life I didn't think I looked very good in hats, but necessity is the mother of invention, or in this case, acceptance, & I found one that I actually liked - reminded me of Rebecca of Sunnybrook Farm. I bought it at the Great Outdoor Provision Company. It was great for Disney, except that it doesn't have a chin-strap, so I had to take it off & sit on it on roller coasters. 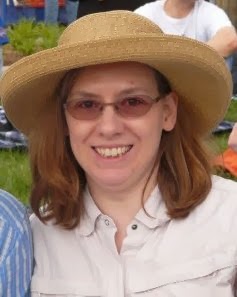 The lack of a chin-strap became a bigger issue in the fall of 2010 when we got our first Smart Car, since it was a convertible. So we went hat shopping again & I found one at REI that had a strap. The olive green color (not necessarily obvious in this photo) was a big draw for me.  (I had the chin-strap behind me in this photo. 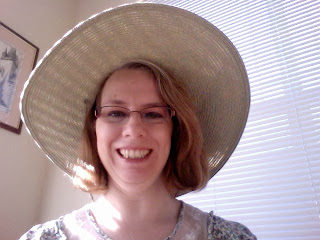 Then we went to Hilton Head with Bruce's family in the summer of 2011 & discovered that Tilley now made some more "feminine" hats. With a broader brim & a new, lighter color the hat drew both Debbe & me straight to the hat rack.  (We have the same coloring & wear a lot of the same colors & styles.) In fact, we each bought one & mine has become my Everyday Hat. 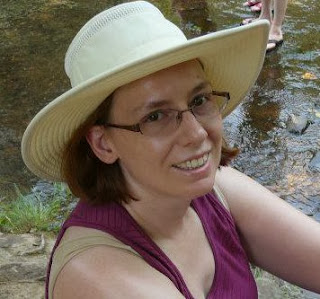 Bruce also has a Tilley hat, but his is more grey-green. Often when we wear them we get comments about our "cowboy hats" because of their shapes & brims. Mine is now also covered with collectible Disney Winnie the Pooh pins that Derek got for me doing Pin Trading on our Disney trips!  :-)

But what really got me wearing hats more frequently - other than my Tilley, which keeps the sun out of my eyes - was the hat some friends got me for my birthday last year. It's a beautiful light blue with a broad brim & a coordinating scarf to tie around it for a pop of color. Our friends were the first to give it its name, which definitely fits & is what I still call it - my Sunday Go-To-Meeting Hat. 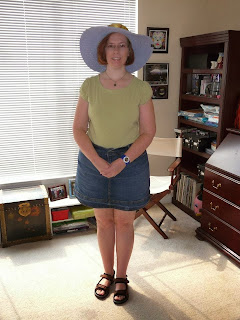 The above picture was taken right before I actually wore that hat to church! It looks great, makes me feel pretty, & got a lot of positive comments & smiles.  That did it - now I've started wearing hats to church! The green one & the Rebecca of Sunnybrook Farm one have both made appearances as has the official Sunday Go-To-Meeting hat - I match them to what I'm wearing.  (I hang them in the choir robe room during service.)

I wear the Tilley to work 2-3 times a week, too, depending on the weather. For a girl who never was much of a hat person, I'm really starting to enjoy wearing my multiple figurative & literal hats!