skip to main | skip to sidebar

Sundry information, thoughts and links to sort us out

The 27th annual Nashville/Midsouth Emmy Awards were held in Nashville on Saturday, January 26th.  As regular readers will remember, I was nominated in the Director/News category. In my business, it's generally considered a bad idea to bury the lead, so...I did not win.  Even so, we had a pretty good time.

On Thursday the 24th, my last workday before the ceremony, my coworkers gave me a little send-off party before the show.  Everybody gathered in the newsroom where we toasted with Sierra Mist (it's clear & bubbly, like champagne, but non-alcoholic, so safe for work).  I got a little misty while Erica was giving the toast - it was so sweet of them to throw me a little party!

Friday the 25th, of course, was Bruce's birthday.  After we did the online check-in for our flight, we headed out to the Smart dealer, planning to go out to lunch & go shopping afterward. Well, that was about when the winter storm started. We got sleet & freezing rain that built up & made for awfully slick roads. We were slipping about on the way back from Cary & we decided to scrap the rest of our errands & go straight home. We stayed in - watching TV & opening Bruce's presents.

Saturday the 26th we had to be at the airport at 9. Albert Einstein Smart Car was pretty much encased in ice & Bruce practically had to chip his windshields clear. Our road & the expressway on/off ramps were still a little slick, but the main roads were clear. It seemed like everyone on our flight was going to the Emmys - I saw lots of people with dress-bags as their carry-on luggage! Also ran into my friend Sonya Williams Harris - who used to work at & still freelances for UNC-TV - who was nominated (& won!) for the show "In the Garden with Bryce Lane" which she helps produce.

Our flight was on-time & problem-free & we arrived in Nashville a little after 11am Central Time. We found the downtown shuttle easily enough & were at our hotel in about 15-20 minutes. We were too early to check-in. But they let us leave our bag with the valet so we could go to lunch. I had looked up the Hard Rock Cafe online before left & I knew it was less than a mile from the hotel. The valet pointed us in the right direction, it was an easy walk & the weather was sunny & mild. Our waiter - Robbyroo - was hilarious, with his hair spiked up into devil horns, & super friendly - he took great care of us. Hard Rock Media Manager Ari came over & chatted with us - & told all the nearby waitstaff about my nomination (he'd asked why we were in town). They all said they were going to crash the ceremony & cheer for me - the "ambiance" is totally why the Hard Rock is my favorite restaurant! Love all, serve all - oh, & serve them an Ultimate Nacho Platter...yummy! 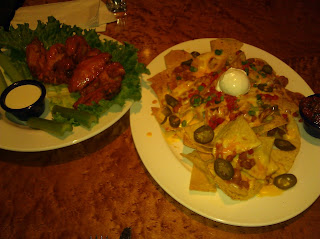 After lunch, it was back to the hotel to get our room. Our Emmy chapter had reserved a block of rooms at a group rate & we were in on those. I had chosen a room with a jacuzzi tub because it was actually the same price as the other rooms in the discount, so why not?! We got settled in (hung my dress & Bruce's suit!), got sodas from the snack bar in the lobby & cash from the ATM, & discovered that the US National Figure Skating Championships were on TV - ooh boy! Bruce teased me that we would miss the Emmys because I was too busy watching skating - but, worry not, that didn't happen!

We had time for a nice soak in the jacuzzi - even with watching skating - & still had plenty of time to get ready. (While we were getting ready, the hotel brought up a gift bag - I assume everyone in the Emmy block got one - that had 2 little airplane-sized bottles of kahlua in it.) I had decided to wear my bridesmaid's gown from my college roommate Cyndee Garrod's wedding. I debated about getting it altered to tea-length & chose not to - in order to save money - glad I did, I would have been underdressed in a shorter gown. I bought Bruce a tie to match my gown for Christmas & it looked great. Dad & Cindy had bought me a bracelet to wear at the Emmys for part of my Christmas & it was the perfect complement to my dress. 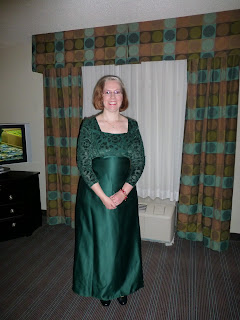 Dinner was quite yummy. We were seated with Bobby, David, & their wives, & composer Fred Story - who makes most of the music for UNC-TV productions, including the theme for my show. We had a good time together enjoying the food & scoping out the production set-up for the live Emmy broadcast!

Nashville/Midsouth is the only regional chapter of the National Academy of Television Arts & Sciences to produce its Emmy telecast live. They are on a tight timetable! There were 73 awards to present & 3 hours in which to do so! Bobby was in the 4th category announced & he won - his first nomination & award in 40+ years in TV! Fred was nominated & won for the music for our Rembrandt documentary!

I was in the 22nd category presented & I did not win. I was super bummed, even though I didn't really expect to win. North Carolina Now is not a newscast, neither is it a one-time special program, so it doesn't really fit neatly into either directing category. Still, I would have liked to have won. After my category, I pretty much tuned out for half an hour or so. I spent the time checking my texts & emails, feeling very comforted by all the love & support I found there!

David would go on to win both Emmys for which he was nominated. My friends Sonya & Crystal also went on to win. Crystal thanked both her WRAL family (the station where she currently works) & her UNC-TV family (where she interned with me) - I appreciated the shout-out, to be sure!

The ceremony ended at about 11pm & we walked back to the hotel. The wind had picked up, making it a little chillier, but otherwise it was still an okay walk. At the hotel we opened the kahlua & toasted to being nominated. Since it was now around 12:30am Eastern time, we called it a night.

The flight back on Sunday was uneventful - it was only difficult because we were so exhausted! Most of us were on the same flight. We even ran into the same couple we'd been queued next to on the outbound flight. Turns out the wife of the couple is a producer at WRAL, & won an Emmy, while the husband is in computers, like Bruce is. We joked about having spouses who support our crazy TV careers & what it's like to be the one sitting at the table cheering on your winning friends.

While I am sad not to have won, I really do realize what an honor the recognition alone is. I am so thrilled to have had the experience & to know & to have met so many wonderful people along the way. I am very fortunate to work in a creative industry & am grateful to all my talented coworkers, colleagues, & friends who continue to teach & inspire me to new heights of creativity each & every day. Congratulations all around!
Posted by Katy Loebrich at 11:43 AM